On February, 2nd, 2006, The Press Office at the University of Leeds released an account of my first article on recollective confabulation. It was an accidental stroke of genius.  Thanks to it being Groundhog Day, the world’s press had even more of an excuse to print an account of the ‘world’s first study’ of  a case of pathological déjà vu, or what many described as a real life Groundhog Day.  This was a reference to the great Harold Ramis film, where Bill Murray plays a character stuck in a time loop living the same day over and over. It was a wave of press interest in my work on déjà vu that would culminate in a New York Times feature, and a slot on BBC Radio Four’s PM programme: a piece about déjà vu that was played twice. For a time, I was The University’s most bankable boffin, and I was even let off some of my teaching duties to have time to conduct interviews in a hectic week.  The interest in my research work died as suddenly as it came to life, only for this cycle to be repeated every few years. 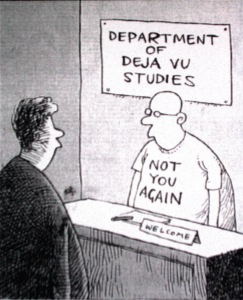 Ever since, my research in recollective confabulation has had something of an ongoing symbiosis with press coverage. My work has been sustained by the oxygen of press interest.  Each new case reported in the news leads to another ten or so people contacting me to describe their own situation. Each of which is equally striking, subtly different, and always as sad as it is bewildering.  I have been amazed by the ability of the press to recreate – over and over again – interest in the same topic, always finding a novel angle for the same basic story: déjà vu gone wrong, lives lived in a loop, what we can understand about ‘healthy’ déjà vu from studying such chronic cases of déjà vu.
AKP was my first case of recollective confabulation. He was a patient at a Memory Clinic in Bath who I saw regularly until leaving the South West for my first lectureship in Leeds.  After three years in Leeds, and not the most easy of deliveries, I finally found time to publish his case – amalgamated with one other woman with very similar symptoms – in 2005. The drafting of the paper was helped massively by Martin Conway, who saw a great theoretical value in the case, and suggested I describe this chronic pathological déjà vu as déjà vécu. This is a term which has stuck, but I mostly wish it hadn’t, for reasons I will come to.
AKP had a very mild memory problem.  He was a retired engineer of high intelligence who was referred to the memory clinic with feelings of déjà vu. At the time, I was working as a research fellow, used to working with people with dementia, and an expert on the varieties of forgetfulness. Every now and then a case would test my knowledge, and I would refer to the Handbook of Memory Disorders, phone some old friends, or book in some time on the one computer in the unit which was connected to the internet. But for déjà vu, there was very little to go on, apart from a description of its frequency in temporal lobe epilepsy. This patient seemed very different from anything I could read about.
AKP’s problem was that his life was repeating: it was the same bird singing the same song in the same tree as he walked down the road. He described drivers and pedestrians as having very regular habits, passing him at the point and at the same time each time he ventured out of his house. He refused to watch television, claiming he had seen it all before. When his wife asked to recall what happened next given that he said he had seen a TV programme before, he replied, ‘How should I know? I have a memory problem.’  AKP was otherwise unaware that he had such a memory complaint, and a striking part of his ‘déjà vu’ (which is not like déjà vu at all) is that he acted on his feelings, his beliefs about his memory. He didn’t read the newspaper or watch television, and he refused to carry out activities, like sign the pile of Christmas cars to send for that year, claiming he had already done it. This made AKP’s life very difficult to manage.  It was very difficult to motivate him to do anything, or to entertain him, because he has done everything already. The result, which I have now seen in other cases, is a kind of apathetic, resigned withdrawal which appears a bit like depression. Ramis got this part exactly right in Groundhog Day.  In a bar in a bowling alley, a forlorn Bill Murray (Phil) asks a fellow drinker:

Phil: What would you do if you were stuck in one place and every day was exactly the same, and nothing that you did mattered?
Ralph: That about sums it up for me.